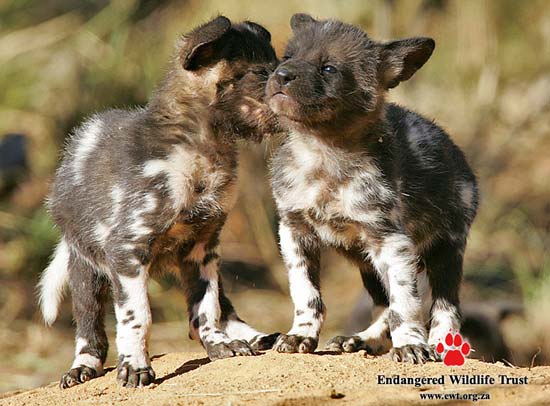 The Wild Dog has been the focus of a major long-term study programme in the Kruger National Park since 1989, sponsored by the Endangered Wildlife Trust. The Kruger National Park contains the only viable South African population of Wild Dogs. Information and knowledge gained from this study has been used to improve management strategies for the species.

This population has fluctuated significantly during this time ranging from less than 200 animals to approximately 400. Impala, the major prey species of the Wild Dog provide adequate food for adults and their pups.


The Wild Dog is a highly social species that lives in packs. Normally only the alpha male and female breed and other pack members help to raise the pups. The packs inhabit large areas of 400 – 900 square kilometers in the Kruger National Park. Attempts are being made to improve the Wild Dog population in South Africa by introducing the dogs into other reserves and to managing these sub-populations as a single meta-population.

In 1997, a PHVA (Population and Habitat Viability Assessment) for the conservation of Wild Dogs was held in Pretoria and the Wild Dog Advisory Group (WAG) was formed as a result of this workshop. WAG’s major objective is the establishment of a second viable Wild Dog population. This is an ongoing effort.