In 1995, the Trusts launched East Africa's first captive breeding and translocation program for the critically endangered African Hunting Dog. This project started with the arrival of 25 pups from three different families on the Masai Steppe, an area where the local Masai pastoralists poison the dogs in retaliation for killing livestock.

A veterinary program is currently underway. All of the dogs have been inoculated against rabies, canine distemper, leptosprirosis and parvo-virus. Blood sampling has taken place, and the effectiveness of a series of vaccinations is being studied. DNA print outs have been carried out, indicating a promising bio-diversity between the three families for genetic viability. Microchips have been painlessly inserted beneath their skin so that the individuals from the different family groups can be identified. The dogs have been separated into four compounds and to date, the breeding program is successful.


A joint release & introduction program with the Kenya Wildlife Service has taken place in Tsavo National Park, integrating four males from the captive program at Mkomazi, with four wild caught females with hunting experience from Kenya. This has been a partial success, and we hope to undertake similar programs in the future. Discussions are currently underway for re-introductions to the larger National Parks in Tanzania, where the dogs will have the greatest chance of success. A re-introduction plan has been prepared and submitted to Wildlife Division authorities.

Feeding time may look chaotic, but it is actually highly structured based on social hierarchy.

The African Hunting Dog is a vanishing species. Mysterious, elusive, and enigmatic, they are the restless corsairs of the African plains. They possess no territories. Only when the alpha female whelps does the pack settle down for a few months, until the pups are old enough to accompany them on their marathon journeys.

African Hunting Dogs are the wolves of Africa. Their heads are broad, their muzzles short. There is strength in the muscular neck, stamina in the deep chest, tenacity in their long, slim legs. They seldom raise their hunting pace above 30 miles per hour, but can maintain a steady speed for miles, wearing down their prey in a remorseless and single-minded chase to the death. 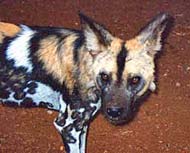 The hunting dog program has grown to 4 separate pens. For years, they were despised as vermin, shot and poisoned by farmers, hunters, pastoralists and game departments. Condemned as stock raiders, they have become fugitives, a vanishing breed once memorably described by conservationist-photographer Hugo van Lawick as "innocent killers".

All over Africa, their history has been one of unremitting persecution. Only when more enlightened attitudes began to prevail did they appear for the first time in their own true light: not as indiscriminate butchers, but as highly intelligent social animals whose hunting efficiency actually improves the quality of the game by removing sick individuals and scattering herds to prevent inbreeding. Tony Fitzjohn is committed to reintroducing the dogs back into the wild.

Sadly, the changes in attitude have come too late to save many packs. Despite the protection of the parks and reserves, they have continued to decline throughout their range. Disease and poisoning are some of the prime causes of their downfall. Canine distemper and rabies, picked up from domestic dogs, can wipe out an entire pack: once one animal is infected, the sociability of the Hunting Dog ensures that it spreads rapidly throughout the pack.

Today, in the whole of Africa, fewer than 3,000 of these remarkable animals survive. Unless Africa's Hunting Dogs are given the help needed for their recovery, the future of these fascinating animals is uncertain. We must act now to ensure their survival.